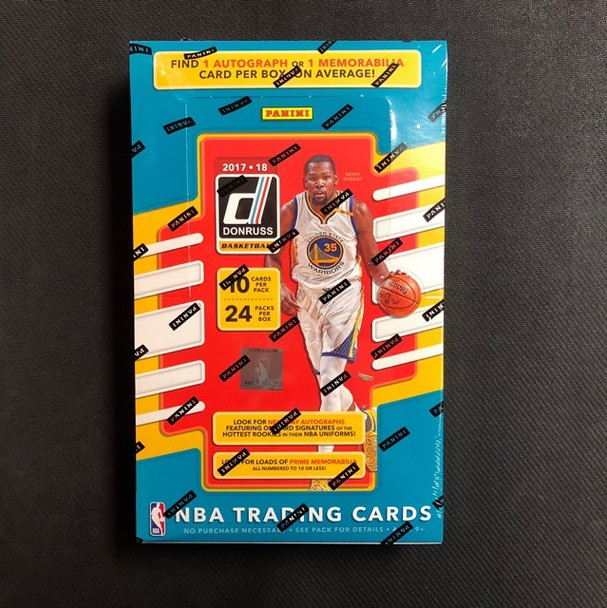 Configuration: 24 packs per box. 10 cards per pack.PRODUCT HIGHLIGHTS- Back by popular demand are the Rated Rookie cards that consists of a 50-card rookie checklist!- Rookie Dominators Signatures is a 30-card set of the top rookies of the 2017 NBA Draft Class.- Look for some of the best to ever dominate the floor with Dominators Signatures! Look for names like Kyrie Irving, Kobe Bryant, Shaquille O'Neal and Larry Bird.- Rookie Materials Signatures includes both a memorabilia swatch and an autograph from one of the top members of the 2017 NBA Draft Class.BOX BREAK- 1 Autograph- 1 Memorabilia- 24 InsertsPRODUCT DESCRIPTIONDOMINATORS SIGNATURESElite Signatures features a checklist of 40 players with every card (sequentially #'d/40 or less.) Every player also has a Gold version (#'d/10) and a Black Version (#'d/1.)ROOKIE DOMINATORS SIGNATURES Thirty of this year's top rookies are looking to dominate the new autograph market!NEXT DAY AUTOGRAPHSWhen each player arrives at the Rookie Photo Shoot, he has his photo taken, card files are sent to the printer, returned to the Rookie Photo Shoot overnight, and signed - all within 24 hours!RATED ROOKIESGet one of the most collectible rookie cards of the year with the Rated Rookies set, featuring 50 rookies from the 2017 Draft Class.ROOKIE MATERIALS SIGNATURESLook for both the base version (#'d/75) and the prime memorabilia version (#'d/10).

MSRP:
Now: $449.95
Was:
Configuration: 24 pack per box. 8 cards per pack.PRODUCT HIGHLIGHTS- Look for the first rookie cards of the 2017 NBA Draft Class.- Back by popular demand, collect Hobby Exclusive Hot Signatures and...

MSRP:
Now: $409.95
Was:
Configuration: 1 pack per box. 10 cards per pack.PRODUCT HIGHLIGHTS- The most artistic cards in the world return for the highly anticipated 2017-18 NBA Rookie Class! Court Kings is loaded with rookie...