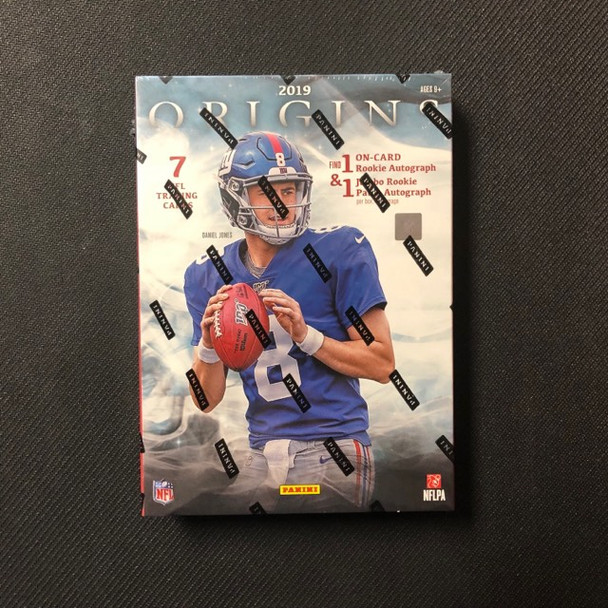 PRODUCT HIGHLIGHTS
- Origins Football is back and features the first on-card rookie autographs of the 2019 draft class in their professional uniforms.
- Chase all the best and newest rookies ready to burst onto the NFL scene including Dwayne Haskins, Kyler Murray, Drew Lock, D.K. Metcalf and many more!
- Find the always-popular Jumbo Rookie Patch Autographs of all the best rookies, which features an oversized-memorabilia swatch and autograph.
- New to 2019 find the Rookie Stars Dual Patch Signatures Booklets, which include two on-card autographs and oversized patches per booklet.
- Find an increased number of cards inscribed with a personal touch in Passing, Rushing, and Receiving Stars Signatures.

ORIGINS OF GREATNESS
Matching a legend of the past with a star from today, Origins of Greatness showcases some of the best players in franchise history. These memorabilia cards are limited to 49 copies and parallel to Gold (#’d /10), Green (#’d /5), and Black( #’d 1/1).

PASSING STARS AUTOGRAPHS
Look for an increased number of cards inscribed by the athletes in Passing Stars, Rushing Stars and Receiving Stars. These are max #’d out of 25 and parallel to 1/1 black versions.

ORIGINS AUTOGRAPHS GOLD INK
Hunt for the rare Gold Ink variations of the of the top players from the 2019 NFL Draft.

SIX STAR SIGNATURE BOOKLET
Chase the incredible Six Star Signatures Booklet cards, which feature 6 on-card autographs of the top rookies set to make their NFL debuts. These are limited to only 10 copies and parallel to Gold (#’d /5) and Black (#’d 1/1).

ROOKIE STARS DUAL PATCH SIGNATURES BOOKLET
New to 2019 Origins look for Rookie Stars Dual Patch Signatures, each booklet will include 2 on-card autographs and prime swatches of memorabilia. These are limited to 25 copies and parallel to Gold (#’d /10), Green (#’d /5) and Black (#’d 1/1).

MSRP:
Now: $114.95
Was:
Configuration: 4 packs per box. 10 cards per pack.    PRODUCT HIGHLIGHTS- Luminance football is back – showcasing full-bleed action photography and loaded with parallels and inserts...

MSRP:
Now: $74.95
Was:
Configuration: 18 packs per box. 10 cards per pack.   PRODUCT HIGHLIGHTS- One of the most anticipated releases of the calendar 2019 Donruss Football is loaded with Rookies, Rated Rookies,...

MSRP:
Now: $231.95
Was:
Configuration: 12 packs per box. 12 cards per pack.   PRODUCT HIGHLIGHTS- Prizm returns for the 2019 NFL season! Collect the colorful content that collectors around the world have come to know...

MSRP:
Now: $224.95
Was:
Configuration: 12 packs per box. 13 cards per pack.Topps Chrome Baseball will be back in 2019, bigger and better than ever, showcasing the season’s biggest debuting stars with rookie cards and...